Does this Look Infected? (Lets Open Him up Part 2.) 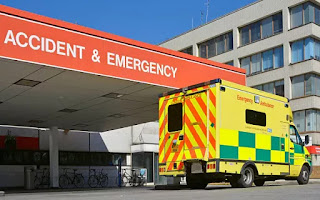 The corridor of a hospital is long when you only have one leg to walk on. It required at least one break and the support of my mum to make it even close to the exit. Then a brief car journey and I arrived at the place where I would be for the next two weeks: the sofa. For the first couple of days the sofa looks like the best place in the world. You don't need to train or even get up. My food was brought to me and the movement I did was largely for liquid and the expulsion of liquid. Ideal. I didn't even experience any pain when I was on the sofa. It was only when I placed my food on the ground that I got and discomfort.

If anyone needs anything to do when they have a lot of time to kill on the sofa I thoroughly recommend the Witcher 3 which must of killed about 20 hours of my time (at least!). Likewise, combine that with a bit of Peep Show and a few board games with my ever so devoted girlfriend and time does dissolve away.

The methodology of being 'post-op' is often like playing a very slow game of pass the parcel with only one player and virtually no reward. Every few days I am allowed to take off different layers of plaster and bandage to gradually get to the prize i.e. a couple of cuts on my knee. 48 hours after my operation it was the turn of the big bandages to come off. These keep compression on as well as stemming any extra blood that has been leaking out. I took this on to see a very, very swollen knee and quite a bit of blood. I was expecting some swelling and took little notice of it. I also wanted to know about my dressings so I face timed my mum so she could have a look at the wound. Her reaction to the knee was somewhat different from mine. More of a "go to the doctors now" than a "chill out bro". So I got on the phone to the doctors and booked and appointment with the nurse and I also called up the hospital to check that I had the right idea and make sure I hadn't taken off too many layers of dressing. They also advised that the trip to the doctors was a prudent idea.

My girlfriend, was not around for the initial drama as she was picking up our new car. However, she arrived in the nick of time to drive me to the doctors and there is no better way to appreciate something you have paid thousands of pounds for than being driven by it in a potential emergency.

As I wasn't quite weight baring, the doctors surgery proved quite a challenge. The hop come limp style I employed wasn't the quickest and the distance I had to master this over was a massive hindrance. Still, at least they had a lift! Once I had waited for a few minutes I was whisked inside to see the nurse. I told her what was wrong i.e. that it was massive, red and bleeding and she looked at me as if to say "seriously what are you doing here you massive hypochondriac". Although once I took down my trousers and showed her the goods (no stop it you dirty people), the expression changed considerably. So, after she consulted the doctor, I was told I needed to immediately go to A&E to be administered with an IV drip.

Now I am a guy who has attended A&E a lot. In fact, in Reading, where I originally lived a nurse actually knew who I was because I had attended so much. What all my trips have had in common, though, is that they have all been expected. Broken bones or sprains etc. are all known quantities. Likewise, you know what will happen when you get there: walk-in, wait, wait, wait, wait, wait, triage, wait wait, x-ray, wait, wait, wait, treatment, home. This time it was a complete unknown. I wasn't expecting to be sent there or have anything wrong at all. I didn't really know what was wrong with me. I only knew that I might have an infection, and of what type nobody knew. I was quite literally terrified by the prospect. I knew that IV antibiotics are serious and I also knew the risks of infection especially as I was nervous that I might have some sort of superbug (MRSA etc.). So I did the first thing a brave 25 year old guy should do in this situation: call my Mum and Dad and make one of them drive up to see me. Meanwhile, my girlfriend and I got, slowly, back into the car and set off to A&E.

Now, when the NHS suspects something is seriously wrong with you they don't mess around in quite the same way that they do if you have a broken bone. It took 15 minutes before I was in to the triage nurse and once again explaining the problem I may have. She smiled when she heard that I may have an infection. Her first thoughts were that the nurse in the doctors may have got it slightly wrong. She said that she would take a look at me anyway just in case. Her expression was somewhat different when she saw my knee. Her exact words were "Ok you might need an IV drip". She then told me I may need to go to a different hospital to see the specialist and that I "could go in my own car as long as I remained stable".

Suddenly it was action stations, after 15 mins more I was back in a hospital bed having blood tests and getting my IV line put in. It was about this point where I was pretty much shaking. However, after a few deep breaths and a realisation that if I worried too much that I would make it worse not better. The nurse also said I would be going to get hooked up to the antibiotics in a few minutes. However, this never actually happened and I was left to wait for my blood test results with the anticipation that I was going to be spending the next few days in hospital. My dad arrived and kept morale up as well as bringing the entertainment resources that I may need for a stay in hospital.

Eventually, after a prolonged wait the doctor called us in to give us the results. What followed was the most welcome anti-climax I have ever had. My blood tests were fine. The knee had just been over used and was full of fluid. It was also less warm than it had previously been. I was over the moon!

The next few days were spent on the chaise lounge. Chilling and completing the Witcher as well as doing (a bit) of work. I planned my sessions for the coming weeks and looked forward to recovery. My final bit of news is that I plan on returning to table tennis tonight. I don't know how much I will be able to do but I will have a little go. Recovery, if I am honest, hasn't been as quick as I might like and I am still feeling more sore than I would expect but I really do hope that in a couple of weeks I will be back on my Table Tennis journey.