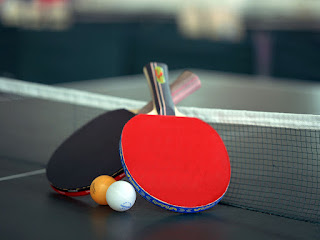 Table Tennis is a lesson in patience and failure. You will hit a ball 20,000 times before it goes where you want it to. You will hit it another 20,000 before it goes where you need it to and then after all that you will go for the killer blow, miss the ball and look like a child who forgot to wear trousers to school and turns up late to a whole school assembly. Basically, persistence is key.

As you know from my previous experiences I have been trying to maximise on my play time. I don't play every day but I will do between 5 & 6 sessions of table tennis a week. I probably average 12 hours a week. It is safe to say I am addicted. Yet, the honest truth is that, I better be. These people are good, many have been playing since they were small children and all of them playing shots with consistency I can only dream of. Therefore, I have now joined two more clubs with the 4th club starting this Friday giving me around 10 hours of pure table tennis against competitive opposition a week.

Now every club is different. My first club, and my "spiritual home" is relaxed with a competitive edge. I play down there and I feel I can beat people but I know I can play against people where I will learn and step up my game. There are a variety of ages from about 12-83 with a median age of about 40. What is really nice is there are people my age. This does make a difference in terms of feeling at home and comfortable. Plus it allows me to win a bit, but more on that later.

Two weeks ago, to the day, I joined my second club. If there is a spectrum of table tennis clubs this felt very much on the other side of it from my "home club". My initial email was met with the response of "We have dedicated league players, who generally only want to play against similar players and those who come to play socially, so you would need to find your own level against whoever turns up on the night." I, personally, read the email as "if you suck find others that suck and don't bring the rest of us down to your pathetic level". Yet, I acknowledged that my own interpretation from a single email could be completely unfounded and resolved to keep an open mind when it came to actually playing.

After a winding journey into the villages of my local area, I found the club. It was, of course, in a little village hall with 4 tables. The atmosphere was ok though, perhaps a tad more "villagey" (add that to the oxford dictionary please) than my home club but the people were nice. I also got to experience table tennis with likely one of the best players I have ever faced. I am literally talking an hour and a half of constant play with a guy who seemed to predict, almost, my every move on the table. His movement was sharp and his defence was sharper still. He would goad me into attacking the table then punish me brutally for it. He was quiet but clearly loved the sport and calmly took time to help me as best as he could. We played a couple of games where I took a few lucky points of him but overall he proved to be a clever and interesting player.

Once I had been punished enough we went to play doubles. Table tennis doubles is not like tennis doubles (as we all expected it to be) it is, quite simply, the most ridiculous game ever. Serving takes place from corner to corner instead of over the entire table (now we know what the white line is for) and from there it creates a game of alternating shots i.e. one person serves the other hits it then the 3rd person and then the 4th, going around ad infinitum until eventually the point is won. Alternating shots are the most difficult thing a beginner will ever do. All a person will do when they first learn to play table tennis is try and get the ball back to the table. Now the beginner has to move out of the way on every other shot instead of returning everything. My mind was scrambled. However, if memory serves me correctly I think we won so overall it can't be that bad!

After a couple of hours of playing on the table I finally got to meet the person responsible for emailing me the details of our last meeting. Now, baring in mind my new open attitude to the email, I tried to initiate conversation and learn about the club. We talked about my knee and he told me how "odd" it was that I might need crutches and he "never needed crutches" for his knee. Which, in the context of the conversation sounded a bit like he was my consultant. However, ploughing on I tried a different tac and asked about memberships etc. It is here perhaps the most pertinent words I have heard so far were spoken to me "you can't play with the good people or you'll bring their game down". If my blog had emojis I would use that red angry face right now. How can an individual who runs a club try and put people off competing against someone better than themselves because of the fear you might being their game down? Sport is about bringing people up. Learning skills you previously didn't have and teaching people to enjoy something you enjoy so much yourself. Putting people in a position where they cannot play someone better than themselves means they cannot learn. For example if you stayed in the England U21s you would never reach the standard of the seniors. The consequence of this, however, has been one of inspiration. I am determined to be a fantastic player and not only beat everyone at that club but teach others to enjoy it in the same way I am doing now. One thing above all else is that I will never miss a session at that club.

My third club is as far from the second club as possible. Less clique and more hugs. I might even suggest that as a motto. The moment I walked in the room I was on a table being taught by one of the people who runs it. If club 1 is play time, club 2 is game time, then club 3 is learning time. I was taught and taught. With 4 of us on the same table we did a drill called "cross-court" where you are continuously putting shots across the table. Constantly, I would be corrected and improved. My shots grew more and more consistent. My top-spin on the forehand and back hand were both brought up to a standard were I was now consistent. My bat position was better and my wrist was in the right place to keep the power on the table. After learning for a while I also played some games and, initially, I sucked. Nerves got to me, everything went out of the window. I feared letting down the people that had spent to much time on me and ended up making the mistakes anyway. Then we switched back to doubles. The lowering of the pressure threshold enabled me to come back to life. I was back to winning again and finally back to my old self. It remains to be seen how I get on back there again but it was fantastic and I can only provide a glowing reference for it and the people that run it.

In the two weeks since I joined these clubs, I have been once more to club number 2 (where I was beaten comfortably by an 86 year old man!) I unfortunately didn't get to club 3 as I was under the impression I would of been having knee surgery so booked an appointment that couldn't be cancelled while I had some supposed free time. The knee surgery will now be on the 8th of November.

Meanwhile, back at my original club, things are going rather swimmingly. I have now won two best of 5s numerous best of 3's and I have been able to at least stay on the table with some of the better people at the club. I am by no means perfect but I am improving at a rate that outstrips anyone else. I have now beaten everyone who is a "non-league" player at least once and I am pushing on towards potentially playing league next March which is the short term goal. Me and Ollie have also found a table to play at in our local leisure centre so if we can get there a few times we will undoubtedly both improve even more. On Friday I will visit my 4th club and then I can officially say I am a 4 club member. That will mean everyone else can say I am officially a bit sad.

On a final note while playing on Tuesday night and regaling stories of my other clubs one of the girls (who is also a very good league player) said to me "don't you play any other sport". I think that about sums this little adventure up.