Getting into the Meat of It 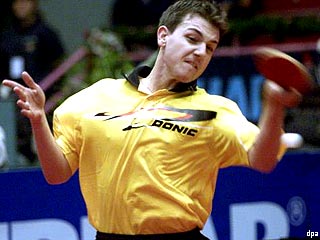 Training is now consistent 4 times per week and I am learning a lot. However, since the tournament, I have have been anything but consistent. My first week was a case of riding high on the buzz of doing well at the tournament. It was also a case of learning how far there is to go. I understood that my ability to manipulate spin was weak at best and my understanding of the serve was poor. My backhand and forehand are now, usually, strong and consistent when a ball is sent to me flat i.e. no spin. Which serves as the basis for improvement of my overall game but it leaves me incredibly vulnerable to anyone who has played the game for even a reasonable amount of time.

First though, I need to say that I have joined a new club. It runs on a Monday and it is very similar to my Thursday club. The players are all friendly and nearly everyone is of a very good standard. Its a long drive for me at half an hour each way. However, it feels worth it compared to the frankly negative experience I had with my previous Monday night club. On my second week there it also provided me with a strange coaching opportunity. I was playing, again, with a guy around my age who was of a very good standard. He was my first real tuition on the famous table tennis shot known as the loop. This is a shot played against a long serve with side spin or a chop with side spin. It basically allows speed to be added to the ball with top spin. It is, in effect, a strategy shot that can change the speed of a rally and allow a player to go onto  the attack. It is also a large sweeping move and requires a specific use of footwork. It isn't the easiest shot to master. It also isn't a shot to be used all the time. However, after 45 mins of practice, I felt I had got the gist of it. The movement of the bat with it going from the knee up to the forehead and the weight transfer all made sense.

Luckily, on Tuesday it was the same again. With a player who is also very talented giving me guidance. He, took me to that level of consistency whereby I could get 9/10 shots he would fire at me. I also did some footwork drills. I would move across the table doing forehands back into the right corner as I moved from corner to corner. I also practised the transition from forehand to backhand whereby I would move, quickly, my feet into the different positions as he put shots at me. It felt to me that I was starting to realise what it would take to be a really good player.

I have always understood that the best players are the most consistent and can generate the most variety of shots and introduce power at any angles. However, what I hadn't realised was that footwork is such a massive part of this. Likewise, anticipation is also such a huge part of the game. Seeing a body position and being able to read the shot can completely change the game. This is also the weakest part of my game. I have a tendency to ball watch. I think it is a hang over from sprinting and rugby whereby I know I am quick enough to get there at the last second. Therefore, I tend not to make the move until the last second. The thing is the ball moves faster than I can get to it and I need to snap out of the habit. This, combined with my frankly awful footwork, is holding my game back.

What these lessons did serve to do, for the next couple of sessions, was make me a player of a different calibre. No longer was I expecting to lose against almost anyone but the most lowly of players. I was now beating league players who had played for years in both division 4 & 3 of our leagues. It felt like I had entered a new phase, where if I could just keep it up, I would be getting to where I wanted to.

Then came the collapse. I am unsure of what exactly happened. I missed a session when my friends visited and, suddenly, I lost the ability to play table tennis. I couldn't strike a ball. I couldn't forehand loop. I couldn't chop. I basically regressed back to being a beginner player. It seemed that now I was presented with multiple choices I froze on the shots. If the ball came towards me I would wait too long and either over or under hit it. I would also get into the wrong positions and I didn't seem to be able to find a rhythm. On the Monday night, at my newest club, it all culminated with my losing to someone who, unfortunately, isn't that good. It has happened to me in places before. My inconsistency is always going to play a part. However, this was about as low as a have felt so far.

As I drove home I called my girlfriend and told her I was thinking of quitting. I am not proud of it. Yet, I was very upset. I have had a lot of sporting setbacks over my years (just read my blogs on sprinting for all those sad and sorry tales). I didn't deal with this one as well as I could have. My poor girlfriend had to listen to all the moaning and confusion as to why I had lost so much. It seemed that this stupid dream might be over before it got going.

The next day I won every game I played. Now, there is a specific reason for this. I got lucky, the guy who had been teaching me at my "home" club was the first guy I got on table with. We ran through both looping and heavy side spin serving. As well as getting me to do some side spin myself on the serves. My returning of his serves and my looping return meant that I had confidence again. I also spoke to him about when to make the decision to do these shots and what it means in the context of a game. After this, against some of my "compatriots" I dominated. I felt like I could do no wrong. I felt I was back to that next level again.

It continued for a few sessions until last Sunday. The club I go to with the busiest tables and the most young people is great fun. It is on a weekend but I often don't perform particularly well there. I am not sure why. I don't know if it is mornings, the fact that I am often playing people younger than me or just the lack of space around the tables making it feel more enclosed. Whatever it is, I am maddeningly inconsistent. I noticed, early on that something wasn't right. My concentration didn't seem to be there. I was playing shots that I wouldn't usually play and I was being lazy at the table. After messing around we went into games. I have a little friend there who when we are playing doubles call ourselves "The Dream Team". Today, he was a dream and I was a nightmare. He hammered me and he deserved to. I sucked. I really sucked. I served into the net, I missed the table. I fired shots into the air. It was a mess. It continued that way for the whole session I went from being angry to laughing about it. I actually learned something from it all. We all have bad days and sometimes it is best to just let it all happen. I know my personality means that my bad days will be awful and my good days make me untouchable. I just need to remember I have more good days than bad ones.

So that brings us to the present day. I have had a couple of really good sessions. I have beaten people I haven't beaten before. I also had a clumsy loss once at the end of a session but overall it is onward and upwards. I am looking to buy a full size table as well as looking to get some 1-2-1 tuition with some coaches. I have already got in touch with one person and the table will come in a couple of weeks. Now, I just need a little more practice....