It has been a while since I last blogged. Life has been so busy that something had to give and sadly it was the thing that didn't make me any money: blogging. It has affected my table tennis as well. I have arrived tired to matches and sessions and my motivation was hit. Throughout it all I have felt close to being the table tennis player I want to be rather than someone looking down a long tunnel hoping they would get there.

Since Christmas I have without doubt won a lot more games. However, I have also lost a few really easy matches. This has largely come down to my timing of the ball. As I said to my coach, you can't win if you don't hit the ball.

I have been trying to work out why I have suddenly lost the ability to time a shot for the best part of a month now. This week it seems to have finally come to me. It seems that my body is ahead of the line of the shot. Basically as my elbows creep back my body falls out of alignment and I fail to see the ball onto the bat. That look an awfully long time to figure out. I will aim to do a post on the real technical aspects at a later date.

Since my last blog I have come across some really weird and wonderful players. From completely dead bats to anti-loop smashers. The variety has been virtually endless. It has been awfully difficult to beat some of these players not because I can but because I am thrown off by it. There is a huge adjustment to be made when you go from playing against a top spin player to a pimples chopper and it is something I am not great at yet.

Nightmare in the Warm Up

The biggest gripe I have is reserved for the start of matches and games. I need a warm up. Nobody should have to play matches without playing a forehand. Yet, I have arrived to matches where most of the time nobody wants to warm up and those that do are playing as if it is a point not to help the other person. You wouldn't see a pro play forehand to around the corner forehand then randomly blast a shot to the other side of the table. I think this is worse because I am left handed. Therefore, people want to play their forehand no matter what which is my backhand. The problem is they never want to go from their backhand and if I go around the corner the above happens! It makes the start of games so much harder. Particularly when my timing is not good anyway. I need to get into a rhythm and I have no chance at all. Some might call it gamesmanship. I call it ridiculous.

I think Ben would agree that I have gone to a new level in training. In his words 'you now look like a table tennis player'. This is not to say I am setting the world alight at every training session. However, we do much more advanced drills and we are ironing out technical aspects. I am not going to lie, he still says some of the same things he said six months ago but he is saying them less and less. It is a learning process.

I have also finally beaten Ben left handed which was bugging me. I really did have the fear that I would never manage to beat him. Eventually though, I managed to beat him over and over again which boosted my confidence and let me know I am going in the right direction.

We are going to start a videoing all of our training sessions. It is something I haven't done enough of. As much as the social media/diary aspect of my training is important, the overall benefit is to my game. I videoed my last session and realised so many things about my game that I had thought I had been doing. It is crazy how many mistakes you don't realise you are making.

In regards to the end of season and the future. I am about a year and 4 months into my journey now and I am looking forward to the end of what has been a mixed bag of a season. I would like to do some tournaments and get some experience that way as well as attending a training camp or two over the summer. I am always looking for a training partner so if anyone in the UK wants to get in touch I would love to do some sessions. In regards to the local leagues I have played in it looks as though one of them will be promoted, one will go down and one will be mid-table. It says nothing about my performance in any of them but it would be nice to get promoted in my first season. Likewise, we are into a cup final with one of my teams as well. I would imagine I will finish the year around 50-50 in wins to losses. Maybe slightly lower as one league was exceptionally hard.

I will do my next, more specific, blog in the coming couple of weeks. Keep and eye out on this blog and of course eastfield for more of my bits and pieces! 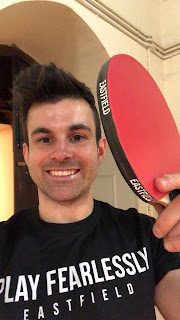