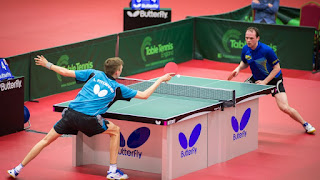 I was going to put 'Welcome to the Jungle' when I initially thought of this blog post but I thought it was a little to obscure to be recognisable as a post about my league start. I say this because the leagues of local table tennis are a jungle. Full of weird and wonderful creatures. I've been sworn at by an 88 year old man and met a guy who only chops and lobs. I've met pimple and topspin. I've lost a fair few games I should have won and I've played a lot of 5 set matches.

The first match I played in the league was about a month ago. I got to my club to find it virtually empty except for 3 tables and some barriers. The echo was a bit disconcerting in the hall and the silence was fairly deafening. Most people were pretty serious like the next 2 hours would decide their lives. However, I was calm. I remembered how much I love competing. I approach every situation with aggression. I want to psychologically beat my opponent and I want to destroy them on the field of play. Its probably not quite how you are meant to be when you are playing against a 50 year old man in 3/4 length trousers who is quite happy to have a tea and a biscuit at half time. I have a feeling that competition in the way I do things doesn't necessarily come as easily to others as it does to me. I forget sometimes what I am actually like. In training it is hard to walk the fine line between a competitor and a friend. Between playing hard and playing for enjoyment. I usually fall one side of the line or the other and neither work particularly well in the training environment.

Above is my second ever match.
I would like to inform everyone I have since found my forehand again!

In a competitive atmosphere there is only one side of the line to be on and I find myself feeling pretty comfortable there. So my league enjoyment was evident from the first knock up. In my first 5 minutes I had someone ask if I wasn't playing because I was a higher league player (there was meant to be a spectator and they were trying to work out which one of the 4 of us it was). Which boosted my confidence. The first game I approached with a similar confidence. There were nerves, it was my first ever league match after all, yet I held it together fairly well. I wasn't perfect but I kept the games close. It was a bit of a rude awakening in a way. I guess I expected a lower quality. More of a pushing game, so to speak but he did put on a few loops and certainly made a game of it. However, I kept it relatively close and was buzzing for my second game. My second game was better. It went to 5 but I felt like it shouldn't have. I just couldn't close it out. Eventually I sealed the win but not with my greatest performance. My final game of this first league match was against a guy who usually plays in the league above. I massively underestimated him and got destroyed, deservedly so. Note to self don't serve long topspin assuming his wild but powerful shots will miss.

So it has all progressed from there really. I have won some and lost some. I have everything from a 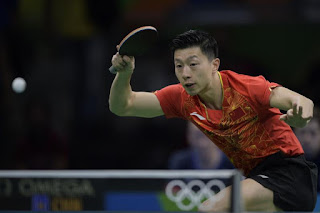 10% to a 60%. A lot of it has been luck of the draw stuff. Who plays for the person that day and who suits my game. I haven't always enjoyed the league for the simple reason that the constant intensity is way too high. Playing for Ben's club I now have nicknamed the situation 'the curse' as whenever I am playing there I feel like the world is going to swallow me up. I have played some really good players though, even in low level local league. People that just seem to know their way around a table and can do most things even if it is a little unorthodox.


There are huge lessons to learn from the league. I will often find myself winning the first game then losing the next couple or wining a couple and losing in the 5th set.  League matches at my level require a great deal of patience. It is all about not making a mistake and ensuring the other person does. I am not always designed for the patient approach. My ethos is still one of  a 'big top spin game' and not of precision, enough of the time. Playing in a controlled, slow way can often feel like a cheap win. Sadly, I have been facing up to the fact that to win boring is still a win and in my last match I absolutely did that. It was all pretty ruthless but I got through it.

The league has taught me control but I have also felt hesitant to implement aggression. The times I have, have meant I have either made mistakes or tensed up. It means I play a half speed table tennis game which is damaging to weaker players but to decent players, it doesn't exactly put the fear into them. I know I have the look of a powerful player and I think sometimes the lack of speed in my game has actually caught people out but I don't want to be that guy. I want to be playing with speed and pace on the balls I hit. It will be something I work on a lot over the coming weeks with Ben. In my own estimation it is stuff like this that children have an advantage in when they learn at a young age. In match play they can hit the ball with all their might and it is still likely to go on the table as they aren't playing as fast. They can learn to temper their game and get a feel for the ball from there. I am not in that boat. I haven't quite managed to control the speed of the ball enough. I am either too slow or too fast. Too much spin or not enough. I am starting to get that feel but a year later and the decisions I make in this regard are still very much in the developmental stage. 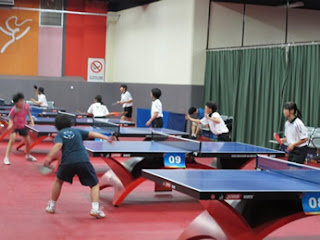 One of the big changes for me has been seeing the weird bats and styles that people play with. I have seen players right the way up to Div 1 local league standard (which is fairly decent) using pretty horrible techniques. A lot of people use pimples to slow the game down for themselves. I was surprised when I first entered the league how prevalent this was. The games can actually be more of a war of attrition than anything else. It is less of the 5 or 6 shot blistering rallies that the pros do and more of a grind to the end. With these weird styles the match becomes less about pure skill and more about pure concentration. I have had a lot of close games and a lot of games where I will start off ahead and end up losing. I initially thought I had just got tense or I had changed my game, now I understand it is concentration that holds the key. It may sound obvious but I didn't stand at the table thinking that mid-set I would switch off. I thought I was constantly focused on playing and winning. Actually, my mind wanders a bit. I focus then I switch off a bit. That worked fine in football or rugby where the game ebbed and flowed but it is much more difficult in a sport where every point is as vital as the one before.

So the league is a massive bundle of lessons. I have played about 8 matches so far and it has been a lot of fun. I hate playing on Fridays and I am not a massive fan of the fact games can go on until 11pm at night (or longer). There is a range of competitiveness (I have been sworn at by an 86 year old) and a range of abilities but no two games are ever the same. I still feel training holds the key to my improvement. The lessons from matches will start to wear thin and table time can be fairly limited (especially if you lose in 3!). The culture of tea and biscuits is absolutely hilarious but rather endearing and the people themselves are sweet. Every league, at my level, is a game of strategy. The wiliest competitors will inherently rise to the top. With any luck, in the months to come that will be me.