Irregular Drills, Positioning and Anticipation - Problems of the Intermediate Player

It is Christmas time! It has been a lengthy delay between this post and my last one. Various things have inhibited my time at the keyboard which means I need to make up for it in the New Year. On a personal note I got a few new table tennis bits and pieces. Firstly, I have got my new table tennis shoes. They are Adidas, who left the table tennis market a couple of years ago. I managed to track some down from the Netherlands and it is safe to say they were worth the effort. Please Adidas come back to table tennis! Alongside that I got some hilariously new short shorts, table tennis socks and a giant box of balls. Pretty successful Christmas overall!

The last month of table tennis was hard. It was a massive roller coaster which honestly had me considering quitting more than once. This was combined with some fairly problematic personal stuff which meant that I wasn't always turning up to table tennis psychologically prepared for what I had to do. I also got the feeling Ben had finally got to the end of his tether repeating the same three things to me over and over again. However, I had three or four of my best league performances during this period and played some of my best table tennis. The last week ended up being a little highlight where I started to grasp what I needed to do.

I went to a table tennis camp given by Gavin Evans and Paul Drinkhall just before Christmas. During their demonstrations what surprised me was how ordinary what they were doing was. It wasn't magic, it was just good stuff done perfectly every single time. I do the good stuff sometimes and I hadn't realised until the last two weeks of training how poor my body position was. After repeating that for the last 5 months it is no wonder Ben is getting bored! I also haven't mastered irregular drills yet. I often look like a decent table tennis player when I am just hitting the ball to Ben without moving too much. My loops are solid and my forehand has a nice enough whip to it. My backhand is slowly improving but is still dodgy. Yet, when I have to anticipate and move to something it collapses. 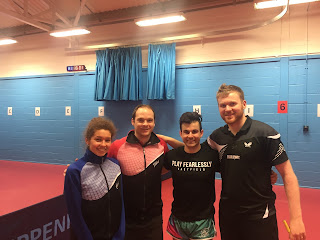 Below is a video from our team training session. I was doing a demonstration of a switching drill. It was fine at the beginning when I was doing forehands but the longer I was on the table the worse it became. I stood up more and more and tensed up as I knew a switch might be coming. It was only having Ben blocking perfectly that kept the ball on the table.


Irregular drills take everything into a 'game' scenario whereby you have to anticipate and read your opponent while keeping your own technique together.

What has been happening is that I translate the tension and wild panic into games. Here I am playing Steve and every shot I play is wild. No control, just panic. Combine that with some rather...funky pushes it means that it is rather hard to win a game.

Body Position - The Key
In all honesty I should of got the message by now. Hit from front to back rather than low to high and stay low and bunched. I suffer from a back problem whereby my default position has been to stay upright and straight. When I go low it isn't my natural point,

I have even changed my service position I was going high with the throw of the ball. Now I am focusing on remaining low and going back then forward into the serve which swivels me into a low position to play my next shot.

Since the two videos I have worked on it a lot and I am slowly getting there. It requires a bit more concentration and getting used to but I am a much better player for it. In the New Year I will share some of the progress I have made.

If you want to play a topspin game then it is essential that the position remains low, stable and compact so minimum effort is required to get maximum spin and speed on the ball. If you look at my game with Steve everything looks hard and untidy understanding how to make everything look easy is the way forward.

The Level to Achieve
Below is the level I would like to get to over the coming couple of years. Ben playing Karl, Ben my coach vs. Karl my Mentor. It was interesting to see how Ben made it look so simple whereas Karl was making the big shots but Ben still won. It was clear that Ben was a little rusty in places having not played competitive table tennis for a long time. Karl is looking better and better and will be very competitive in the top league of local league next year.

Anyway that is all from me! Have a great New Year!