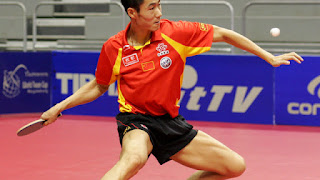 I am in the "tweaking stage" of my technique. This is vital to progress and to the medium term goals of dominating the local leagues. I had a huge jump in progress with Ben this week. The irony is that we didn't change much and actually went back a stage in regards to drills. I knew this was the right thing to do as children who become professionals will be able to do literally hundreds of basic shots before they advance on to the more technical side of things. The drills were largely forehand to forehand drills or backhand to backhand. No shot transition at all, no pushing, no real movement until the end where we did loops and drives both on the forehand side. It was brilliant. We got to finally look at what I was doing right and wrong on my backhand and forehand. My backhand, previously so, so wrong, is now right. Well, it is right when I am not having to move too much or adjust more than a foot or two! The forehand was as crisp as I have ever struck it. Largely due to an adjustment on the wrist that changed it into a more pronated position this meant I struck the ball better. Likewise, my body position was more on my toes and I finally understood why the leg movement is so vital i.e. the shot doesn't change very much in regards to the arms and hands. The shot, if it is a loop goes from low to high. The shot on a drive is from back to forward. Therefore, the legs must be constantly working to give the shot both the speed and spin it requires to beat the net and the opponent.


The day after I got my first chance to put this work I had done with Ben into practice. I played a long time with one guy. He was inexperienced and a lower level at table tennis than me. I didn't have anyone else around to play so I made sure I practiced what Ben had taught me. Overall it was great. I didn't just beat this guy using experience or knowledge I beat him with power and precision. My second opponent was a good lady. She is division two and pretty decent. We started on backhand and forehands. I was once again impressive and relaxed. I showed my renewed confidence and quality in my strokes. I think I left her pretty impressed overall. In game was a different story. I struggled, a lot. She observed that I wasn't standing on my toes and I wasn't moving. She destroyed me but taught me a valuable lesson. I felt that if I learnt this lesson I would dominate the next games I played. 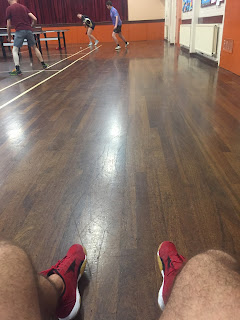 Sadly, that was not the case. Technique in table tennis is so hard to maintain in game. I have to say I was pretty excited to play today. I thought "I'm finally ready". I thought I had learnt the shots I needed to and I was ready to dominate a few people. I didn't. I missed the ball. I missed serves and I shanked the balls off the edge of the bat. I was a bit shell-shocked if I am honest. I tried really hard perhaps a little too hard. It was all a bit tense and my timing was off. I can't blame anyone but myself but I have to say I was disappointed. I really wanted to show off my progress.

It took another 24 hours before I caught finally, finally say I was a better player than the week before. The big thing I noticed was the forehand. I had finally got spin on every shot. I was taking the ball crisply and cleanly. It meant that the people who I was playing, who were almost all much better than me were much closer. It wasn't always perfect, simple things felt hard and I got caught out a lot but I took points I wouldn't have previously and kept games tighter than I would of ever done previously. I also won points. I didn't just let the other person make mistakes I actually outplayed them. Honestly, I am not consistent enough. I don't deserve to beat good players yet. I have foundations but no experience, no tactical skill and I lack knowledge of key shots.

Ben uncovered that weakness in our most recent session together. As my topspin game has got better and better in both the backhand and forehand I have not suddenly become a pro. The first big issue is my transitional game and movement. The "figure of 8" as Ben calls it. It is basically how you move and switch between forehand and backhand shots. This has to be smooth and combine with three other things. First, the crab like side step and low body position. Second, the appraisal of the opponent to decide on what movement you should make. Finally, there is a drop and return to a neutral position after every single shot made. It is so damn hard! Me and Ben do a drill called a switching drill. I call it "the world's hardest drill" and Ben calls it "the drill all Chinese children do before sessions". So after two days of struggling to do it and briefly considering changing the aspiration of the blog to "my 8 year journey to becoming a Chinese 5 year old", I finally mastered it. Actually, that is a massive lie I am not much closer than I was before I started. It is really, really hard. If anyone wants to know what it actually is, have a look at the guys from Pingskills making it look super easy.

Sadly, the sessions have also uncovered another embarrassing floor in my game: pushing. I mean seriously, who is bad at pushing? I didn't realise I couldn't do it. Though, I have never even thought about it before. I have always just done it. Someone told me how to do it once and I just did it that way ever since. However, Ben said he was "surprised at how bad it was". He said Sam and him could have pushing matches where neither him or Sam would miss. I missed once every 5 pushes, on average. Basically I suck and I didn't even know it. I have been out on the table today trying to practice pushing on my own but if I push into half a table the spin that comes back is topspin. In a pushing rally backspin comes back with backspin. So lets see if I can enlist the help of random table tennis strangers to help me become a push master.

The end of this post, apart from being a progress update, is a chance to say how big the foundations of table tennis are and how big they need to be. Me and Ben spoke about building foundations as a new player. He spoke to be about how creating a deeper foundation than people who don't learn these basics but not always, initially, building the building as high. I, think my building is a little higher than my compatriots but not as high as I would like, however, I know my foundations are getting bigger and deeper than anyone around me. If we go back to my Chinese children, who eventually turn into the Fan Zhendong's and Ma Long's of this world, analogy, my foundations are still much smaller than they need to be. Ben said he didn't learn all of these till he was 18 or 19. So although I am super far behind, I am actually a little ahead!