If there was ever a milestone in my new sport this is it. When you do things under your own steam you can only get so good so quickly. Bad habits are formed and no matter how many YouTube videos you watch it will never be enough to replicate the eye of a coach. In all honesty I imagine coaching will be one of the last bastions of human use once the robots take over all our other jobs and eventually the world. 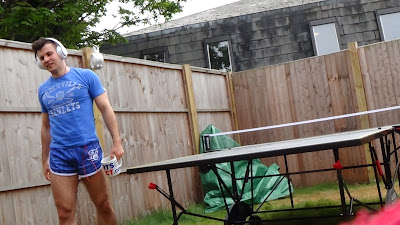 OK, I digressed a little there. Coaching is essential to an athlete. In the professional ranks an athlete is the face of a network of people supporting and controlling every aspect of that individuals life. In reality, an athlete cannot exist without a coach. As I have explained before, coaches in table tennis are hard to come by. Even less so for a 26 year old guy who should be playing the sports he is reasonably good at. Though through a miracle and a ton of kindness I have had two people volunteer to coach me. It gives me around 2 hours a week of "me time". I have to say it is pretty awesome. Just perfecting everything, doing it again and again. Getting told how to do things, getting told when I am bad and when I am good. The drills are great and, yes, sometimes I feel like I get worse before I get better but I know I am going to get better. In the immortal words of my girlfriend "if you don't become good now there is no hope for you". I am inclined to agree.

However, lets rewind a little to the start of this chapter. I was having a bit of trouble finding some consistent coaching from any "affiliates" of England Table Tennis. At my "home" club, I had a got to know a guy called Karl who had taken me under his wing a bit and was doing a bit of practice with me. It had definitely had an effect but it was 20 minutes at best in the middle of sessions. It just wasn't enough. However, I knew he was a good player and technically pretty sound. I therefore decided to ask him if he would do some coaching with me. It was surprising how quickly he said yes. He really did want to help out as much as he could.

We are now three weeks into our coaching sessions. We do them every week starting about half an hour before the "home" club night and finishing about half an hour into the main session. We have mainly been focused on the forehand loop. This is my most inconsistent shot. It is actually what has held me back the most over the past month or two. Everything else has seen improvements but my looping has gone up and down like a yo-yo. It is a technique combined with an issue in my own psyche. The technique is a combination of forehand drive but a more upward motion whereby you "brush" the ball creating topspin. It is used largely as an attacking "opener" i.e. an opponent pushes the ball long on the table with backspin and the ball is then lifted using topspin over the next to create, usually a forehand rally or winner. However, the brushing of the ball and lower position of the bat has created timing issues for me. It is also a source of tension, whereby, when I have time to hit the shot I rush the shot and create problems for myself. I am used to power sports, whereby, waiting for anything isn't really a factor. These sports are just a reaction and then an explosion of power. It is hard to take away that mental attitude and replace it with a more serene nature. What tends to happen is that I will get the loop for a while but when the ball slows down I will misjudge it and miss it entirely or get tense adjust my bat at the last second and put the ball into the net. What is clear, however, that I am improving in this area and against most players I have seen a vast improvement in performance, aided massively by these coaching sessions. The largest improvement being in the games immediately post-coaching. This performance boost often decreases as the week goes on highlighting the fact that it is not ingrained into my sub-conscious, yet.

Two weeks ago I also got another huge boost in the form of Ben Larcombe. As I have said before his story of trying to get a guy in his mid twenties into the England Table Rankings in a year certainly turned my head when I first decided to take up a sport I hadn't done before. Likewise, my trip to his club had also proved very useful in finding out about my technique and the flaws I hadn't realised I even had. I knew if I could get a bit of advice here and there it would be of great help to me in my own personal journey. I also understood that personally coaching someone who sees their own journey being 4-8 years rather than a year who is a little older than most beginners was likely to be a long shot. Yet, it was to my surprise that I had a message from Ben on Facebook saying he had read my blog and wondered about my personal goals. I simply told him I was aiming to beat Ma Long by 2020 to win GB's first Olympic Gold Medal in table tennis, become a millionaire celebrity and retire to the Bahamas. He said that was pretty reasonable, if a little modest.

I suggested we could chat about goals etc. over coffee. Mostly because I wanted to pick his brain and find out if my real goals were even viable/what I should and shouldn't expect of myself. Well Ben had other ideas and said we should play table tennis somewhere. I hadn't suggested this myself as I am not looking to force someone into playing with me (apart from Oliver Wilmot) as I know it would basically be a coaching session for someone of his level whether he intended it to be or not. It is funny how nervous I get when just training, sometimes. When somebody, Ben or Karl, is giving up their time to play and help you make yourself better then you instantly want to impress them. It is what makes the coach-athlete relationship so important, if you look up to somebody and want to do everything you can to improve then a coach values that. Likewise, if a coach sees your willingness to improve then they will do everything they can to help that happen.

For nigh-on 2.5 hours me and Ben went through my forehand, my backhand, my looping and my movement. Fundamentally, my movement is my weakness. I am too reactive and I don't anticipate where I need to be. It means that I end up in the wrong position and performing a shot which I have little control over. I found out a lot of stuff I had been told was wrong in little ways. I had applied a lot of what people had told me over swathes of strokes and I had become basically a bit messy. I also had a stroke that was short to say the least. That fundamentally came down to how I held my body. I am too upright, too straight backed and as stiff as a board. Ben broke everything down into chunks and rebuilt it. I also got drills to do at home without the ball (shadow play - see below - don't laugh Ollie).

Ben's main attribute is not what drills he gives me or the fact that he is basically a human backboard but his explanation of concepts. I have had a lot of coaches in a lot of sports and the difference between the good ones and the great ones come down to two things. One, how they make you feel, which I will come onto. Two, how they communicate adjustments. Ben gives me an adjustment or two to make at a time. He is patient with how long the adjustment takes and then he gives me the next adjustment. They are each explained succinctly and they all make sense to me in terms of creating a chain. This "chain" is vital to me. It is how I embed movements and shots into my sub-conscious. Ben doesn't miss a link on the chain. Everything is from the ground up and enables me to build on it one small step at a time.

Ben and Karl have a similarity in the principle of how a coach makes you feel. Firstly, it requires respect. As an athlete I have to respect my coach and believe in what he is telling me. This has to be mutual as the coach must also be willing to listen to the athlete as they are the person completing the session at the end of the day. Some things that come naturally to one athlete may not come as naturally to another, therefore the coach must be adaptable enough to adjust sessions to the individual. The coach must also command the ability to motivate the athlete. Karl and Ben both do this in their own way. Karl as a senior player who feels "reachable" gives inspiration to me to try and show him that I am aspiring to be like him. Ben, who is another level of player doesn't have that because he is my most distant of goals in terms of the level he is at. He is a true coach in regards to his motivation of me. If Karl is my Roy Keane then Ben is my Sir Alex. I want to impress Ben in a different way. I want to show him how much I have listened, how much I can improve and how much I want this. For both men, in slightly different ways, I am prepared to do whatever is necessary to achieve my goals.