Unusually for my blog, I will try and keep this short and sweet. After my session with Tom we went to a ping-pong bar called Bounce. Below is my mini review of what I thought of it: 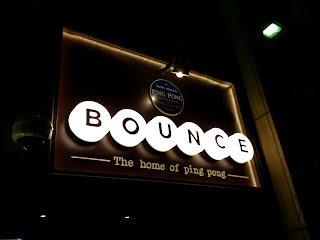 The biggest surprise when we got to the venue (Farringdon) was how large it was. I counted 15 tables in total. They all had large groups attached to them with a wealth of people around the gantry's and, of course, the bar. It was darker than I expected for a quasi-sports venue. The tables were lit but perhaps not quite in the way a bowling alley would be. Milling around were people of all ages, from business men in their 50's to students who probably spent too much time in and around the various bars of London. The best thing about the clientele was how it seemed to bring a fairly even split of men and women. Almost all the tables had women on them and a couple, in what was clearly a work night out, had solely women playing. The bar had a very "hipster" feel to it. Especially, as it used its historical heritage as the "site where ping-pong was invented" to full effect. It also probably took the bar into a more "premium" territory.

What fascinated me, however, was the standard of table tennis being played. Not because I was expecting people to be amazing or even mildly decent but because it stopped people from even having games. Most people were quite literally patting the ball to each other. This is no exaggeration the ball barely moved from point to point over the net. I have no problem with this. It is sometimes just fun to play with a ball and zone out while having a few drinks. However, I do wonder if there is a way of making it a little easier for the novice. For starters, the bats were decent but quicker than most cheap starter bats. I, and the other boys, loved the fact that they provided such quality but I wonder if you take the speed of the bat down, whether it may have made it easier for those who were playing.

Overall, it is a bar that is clearly made with that touch of quality. From the bouncer on the door to the wooded aesthetic it gives a premium feel throughout. It is also great to play on good quality tables and have bats that are easily passable for any player. Although, unlike bowling, to even hit the ball requires a degree of co-ordination. I wonder if it will be this that holds it back or if it will slowly bring table tennis into the mainstream. I also wonder whether table tennis, as a sport, is even ready to capitalise on the success of these bars that are popping up around the country. The sport has a tendency to divide itself noting how the casuals play "ping-pong" and the players play "table tennis". This divide will need to be broached if either party are really going to see success in the long run.