Round and Round We Go - Learning Spin 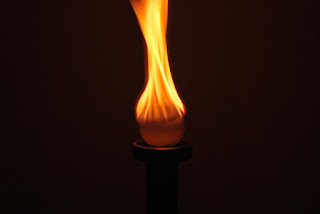 When I first started table tennis my idea of spin was all to do with the serve. I remember the first time I came up against it and a guy literally held the ball and dropped it as his bat whipped across the back of it and created fairly heavy side spin. I went to put the ball back and the ball pinged off my bat and off the side of the table. This was the repeated again and again until I lost. Sadly, that technique only works on beginners and these days I would be putting a side spin ball that bounced that high and that slowly into a corner that was well out of reach of my opponent.

Still though, for a long time spin was a serve or a chop. I learnt new spins, top spin, back spin, side spin and float spin, however I always understood this in the context of the service or a chopped ball. A forehand. to me was, effectively, a no spin shot where I just aimed to his the ball as hard as I can until the opponent lost the point or I made a mistake. The backhand was the same, as was the push. Ben changed all of that with the idea that spin is your "safety". When a ball is played with topspin it will dip onto the table meaning a powerful shot will be much more accurate. It will also made the shot more difficult for the opponent to handle as the ball bounces high with increasing speed and spin.

Creating spin was a much bigger challenge until Ben suggested I needed to feel the ball with my hands not my shoulder. Then, suddenly, it clicked. The spin I play on my forehand is now fairly excellent at all times. I am much more accurate and, combined with improved movement, I am starting to look like a good player on that particular shot. The difficulty is the rest of my game is struggling a little bit more. I still haven't got the feel on my backhand or the movement to create a good shot on a consistent basis, likewise, spin is lacking in a way it never does on the forehand. My push is a funny one. I used to be really comfortable pushing the ball back but I now loop everything I can. It has actually created a weird problem whereby I can't push as effectively as I used to. Ben has been encouraging me to use spin on the push as well but I can be a little inconsistent with it.

This, week saw me break my comment virginity on my blog! A guy called Tom commented a lovely comment about keeping my head up and how he relates to the challenges. (I later found out Tom is a coach, unsurprisingly - who, like me, started Table Tennis late) He also seemed to sense that I was finding it tough. However, I think it is a failing of me as the writer of this blog that I don't show how much I not only enjoy it, but how much I have improved. I never look back and show how far I have come. From a guy who had never played a racket sport or table tennis in his life and could barely hit a ball to a table tennis player who can loop, play a good forehand and, finally, win. I am also at a stage where there are some people who are now behind me. I have overtaken and left them behind.

I waited a long time for this and it hasn't always been an easy ride. This week I got one of the biggest wins I have had so far. It was against a guy who is older but still very mobile, he combines that with an unorthodox style which has meant I never get that close to him in games. However, this week it was different. I took him apart. Everything I did had spin, the serves were on the table and I managed the game perfectly. It was the most surgical performance of my table tennis career so far. Later, I thanked Ben for his help in getting to this point and he asked me "what changed in the match that had such a big effect?" I replied it was three things really. Relaxation was the main one, secondly, my backhand was better, not perfect, but much better. Finally, my management of shots, I played shots into different parts of the table moving my opponent around much more. Ben had been encouraging this the previous day and clearly it had worked. 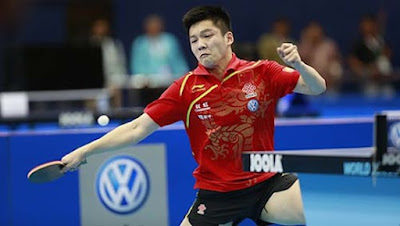 When it comes to relaxation. It is fundamentally the hardest thing about table tennis for me. Everyone who has met me knows I'm not a chilled guy. I am usually a bundle of energy and in competition I get very, very tight. It has held me back in every individual sport I have played but usually it is less noticeable than in table tennis. In this sport relaxation makes spin and spin keeps the ball on the table and the ball on the table wins games. A couple of days before my win that felt like the "step up" I was waiting for. I had a different experience. I am not a big fan of playing table tennis against guys my age and around my level. There is no winning with it. I play more than them so if I win they put it down to that. If I lose then they have some sort of natural affinity for table tennis and therefore "deserve" it more. The truth is neither is true. However, I was put in a situation where I needed to win against a couple of guys. Both of whom are tricky if I am not on my game. Tension meant I wasn't on my game. I wasn't moving freely, I wasn't using my hands effectively and therefore, I wasn't creating spin. I managed to win against both of them in relatively comfortable fashion but I knew I had used my experience more than my skill. It also taught me how much my nerves were effecting my game. If my shoulders are used rather than my hands then my ability to play topspin and put the ball into the areas I want goes and suddenly I am in danger of going behind.

Spin has created a whole new world for me. No longer does he who hits hardest win. It he with the most spin combined with pace and ball position who wins. To do this requires the brush of the ball at high speed. To brush this ball requires what Ben called "feel with the hands". It is in effect, a flex of then elbow and a small flick of the wrist, on the forehand, and a larger flick of the wrist combined with an extension of the elbow, on the backhand. Everything is "soft" and fast. The body rotates to generate power but the arms just "whip" quickly and efficiently. To go between the two strokes requires speed and readiness. Consequently, this week, me and Ben worked on transition. Keeping the softness, the right shape and completing the shot while moving between the backhand and the forehand. It is tough. I am nowhere close to mastering it. However, I could feel how the transition means that I make everything into a big long chain. Effectively, this is traceable throughout every point. Each movement within the point is linked to the previous one. Every point, although unique in itself, is one big long movement. Basically it is contemporary dance.

The key to this blog is evolution. I have evolved spin as I have gone on and I will, no doubt, continue to evolve it as I work harder and harder at it. From the serve to the strokes to the lobs to the smashes everything will require heavy spin eventually. I will need to be in the right place at the right time to achieve this, as well as being relaxed at all times. It is not always easy but I am well on the way to achieving it on a consistent basis.