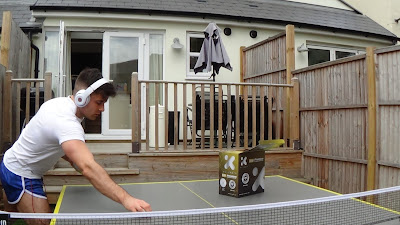 My last entry was the story of psychological endurance. It highlights the biggest personal challenges I have in my life. The battle with my own psychology only exists because I created it. It only happens because everything becomes a bit too much for me and it usually manifests because I want something too much. It also becomes its own self fulfilling prophecy.

After my session where I was humiliated I wasn't exactly excited about playing table tennis. I felt bruised, both in my ego and in my table tennis self esteem. However, there is no rest for the wicked in table tennis and I was immediately asked by Ben to play in an end of year tournament. I am basically Ben's shadow at the moment so I headed down to the tournament. It was not in a normal league so it was a more relaxed affair but most people who came down had at least participated in a few matches. Thursday was hanging around in my mind and I have to admit I basically wanted to turn around and drive home on my whole way up there. By the time I was in the venue I was basically a bundle of nerves. A brief list of my thoughts are below:

1. Don't perform like the last session
2. Make sure you show Ben how much you are learning
3. Make sure you win
4. Don't miss the ball
5. Make sure you remember what you were told
6. Don't go out in the first match
7. Remain calm

If I needed to tell myself to calm down I was already too aroused. I'm not proud of how my brain works sometimes. I suffer from nerves more than I care to admit and getting control of that will be the biggest part of my table tennis learning curve.

By the time we got to the first match I was so nervous. The problem is there isn't time to settle in table tennis. It isn't a team sport like football or goes on a relatively long time like tennis. It is quick and mistakes are punished. I was lucky to have a handicap which gave me 3 points on the first person I played. My opponent wasn't particularly happy about this but it helped me out. It was close but having a few extra points to start with on a game that is first to 21 was important. In the second set I calmed down just enough to pull away. However, it wasn't great table tennis it was just that I had a bit of quality that even on a bad day I could do enough.

After a bit of a wait and a doubles game that we (just) lost against the eventual winners, I had my second match. I had played against the guy in my first ever doubles match a few weeks before. He was a really nice guy and so friendly that it was quite a relaxed game. It was actually perfect for me. I was a different player. He had the lowest handicap in the competition so surrendered 10 points to me. However, I still dominated him in the points the first set being closer at around 21-9 and the second set being 21-4 to me. He was a good player but I was just as good as I am in knocking up at the beginning of a game. It shows the difference relaxation can have.

Obviously, having played so well against the favourite I was thinking I would win the whole tournament. I say obviously, I mean that I was a fool to think like that. If anyone ever has listened to a post-match conference of any sports player in the world they say "we are just looking to win the next game". That is the correct way to think. My way of thinking creates expectation, expectation creates pressure and too much pressure leads to failure.

At the beginning of the tournament I had knocked up with my third opponent. I looked like I had been playing for years compared to him and he was barely putting a ball I hit on the table. I was confident. I also had a handicap of three points on him. It was a done deal. In the first set I was 12-2 up. Everyone was watching our game and most people were admiring my style. My opponent, himself, said to me at this point "well this will be over quickly". I thought that myself. I then proceeded to lose 18 points in a row and lose the game 21-15 in the end. I was not feeling good in the second game but I believed I could come back. Which I did. I didn't exactly play well but I played conservative table tennis that kept me in the game and made sure I won. Sadly, where the pressure left a bit in the second set it came back with a vengeance in the third. I just froze. I served into the net, over the table and too high over the net. I didn't attack the ball I just didn't play table tennis. I lost. The guy himself got a round of applause from everyone there. I was shocked and humiliated. I deserved what I got though. It has been my single lowest point in table tennis and I genuinely wanted to cry. However, I also knew it was my fault and that I needed to learn to cope with pressure.

The next day I had another session. After a period of self reflection the day before I was really trying to play the points. I played a few games and won my singles matches. However, I cheated. I didn't actually cheat but I cheated myself. I could of played how Ben had taught me. I could of served the way I was meant to. I could of moved how Ben told me and played the shots at the right time. I didn't and I won but I didn't feel great about it. I felt like a "ceiling" player. I wasn't going to progress like that. It was cheating myself for the win and creating short term gains at the expense of my long term progression. It did tell me that I can beat most people of a certain level if I play in the awkward but simple way that most people do i.e. I can do their game better than them. It also told me that, that style is in the past and I shouldn't want to return to it. No more ping-pong and more table tennis. 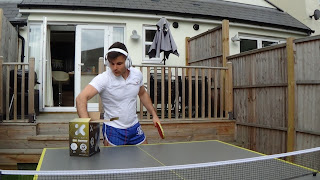 Since then it has been a case of practising. I have been changing my serve. It used to be just a throw in the air with a classic spin on it. It is now a lot more professional with me standing in the corner and wheeling around into position. Mostly, I practised side spin serves at first. However, now I am doing fast top spin serves and backspin serves. In match play it is costing me at the moment. I am commited to it but I am inconsistent. I get the technique wrong or throw the ball incorrectly or I even miss the ball entirely. However, when I am at home and getting it right I know it will make me a 10 times better player from the serve itself to the movement onto the table post-serve. Like everything, it just requires a little patience.