The Mess of Learning (My First Video) 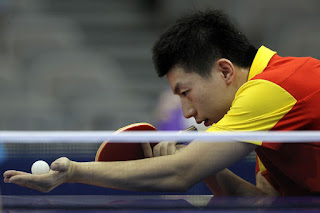 Learning always seems to be a simple process. Take skill A that you want to learn, practice it, copy others and attain the correct technique then move on to skill B and repeat. What the ideal 'model' of learning doesn't tell you is that skill B, once learnt, may interact with skill A periodically making skill A worse. Likewise, you might fail to learn skill A or B a thousand times before it works effectively. Also, most skills aren't on a completely closed loop. Skill A might have to have skill C before it is truly effective. Likewise, skill B might come in tandem with skill A meaning a little bit of confusion over the skills. In other words, the simple process of learning can become a bit messy.

"Chunking" or the breaking down of things into smaller pieces of information work perfectly for me. I also require a logical pathway, whereby I can create a process. In schooling terms this would be, for example, learning about the solar system but not explaining why the solar system exists. The system breaks down for me. I need all of the chunks of the full story not all of the chunks of half a story. It means my attainment of goals can have huge peaks and troughs. Weeks can go by as I fill in the remaining parts, then once all of this has happened, I will make a leap forward that has seemingly come out of nowhere. It also means that once these chunks are in place I never forget or "unlearn" a skill. The one problem is that it can create a huge lull in both performance and progress for periods of time. Psychologically, this can be, not only damaging, but creates a sense of fear within me. This fear stems from the idea that I might never improve, that I am at my limit. I am always wrong but I have to be more patient and look to the long term more than others.

If you take the video below, for example, you can see me practising services, over and over again. This isn't the whole story, though. At different times I am concentrating on different aspects of the service. During the video I was mostly focusing on reverse side spin, wrist speed and where my bat was making contact with the ball. Later on, during another service practice I was focusing on my body position (note: my high starting height bringing the ball higher over the net than it should be). It can be boring repeating the same movement over and over again but breaking it down and seeing improvements in one or two aspects can actually make the mundane much more satisfying. These 20 minute service sessions I aim to do at least once a day, that way it doesn't get too boring and it means I can keep up a consistent training regime that fits in with everything else.

Okay, so the other thing that is in the video is a rather lovely table. Sadly, it is outdoors as, if I brought it inside, I think I may gain some ability in table tennis but lose my girlfriend. After a few hours of indecision I decided that I would stick with my girlfriend. Talk about a lack of commitment! Seriously though, it has been fine outside. I got the table from Costco (http://www.costco.co.uk/view/p/kettler-axos-3-outdoor-table-tennis-table-2-bats-3-balls-cover-183283) if anyone wants one and I saw it recommended on (http://www.experttabletennis.com/). Sadly I am not sponsored by either of these companies but feel free to contact me with a massive pay packet and i'll be happy to recommend any garden furniture or household items that may improve one's ability to play table tennis. The table itself is great but I can't really put it half up and hit the ball against it because it just doesn't return to me naturally and therefore becomes a massive nuisance. It is great for service practice, if you are like me and can just repeat things over and over again under the illusion that it may lead you to victory. It is also great for when I have friends over. Once again I employed young Oliver to help me build the table and play with me. It was nice playing without having to go all the way to a club and, bar the odd strong gust of wind, my garden is fairly well shielded so the ball acted pretty naturally.

The knock about started pretty normally. Ollie great to knock about with and get some extra time on the table to focus on my forehand stroke. As always, Ollie loves a game so we started playing a few matches. However, whereas I would expect to beat Ollie 99% of the time these days I suddenly started losing the majority of games. I was perplexed, could all of this practice be for nothing? I really started to worry. Had I not improved at all? Was I literally learning nothing? I started to notice a few things though. I kept having to reaccelerate the top spin of the ball over the net. Likewise, strokes that I would usually devote a small stroke to were becoming much longer strokes to put enough spin on them. I couldn't understand why. I was just furious that I couldn't play the way I wanted anymore. The afternoon's session basically finished that way. I was pretty upset about it all but I did think there must be a reason why I had become so rubbish in an afternoon.

I am well known for having "meltdowns". I basically start losing then self destruct. It isn't big or clever and is massively detrimental. It is something I definitely need to work on. I thought it might be because of that, that I was rubbish. However, I had not had a self destruct moment. I had basically been rubbish the whole time we played. So it couldn't be because of that.

Ollie returned in the evening for a few more games. This time I decided to be a bit less lazy and go and get the one variable we had changed when I played him the first time. My bat. I genuinely didn't believe that my bat was the thing that was messing me up. Surely a good table tennis player can use any bat? Apparently not. The moment I had my bat back in my hand I was back to normal. I could serve properly and my shots had speed again. Everything was quicker and the ball was where I expected it to be on the table. Playing Ollie went from being the hardest game to being a more relaxed experience. I didn't lose a game with my bat in hand whereby I was going 3 or 4 games without a win when we both had the table bats.

It was fascinating to see how much having a bat that suits the player is a factor. Ollie and me swapped bats again and I noticed how him having my bat actually made him easier to play against. He plays a slow game that explodes on occasion. Using the bats that came with the table enabled him to slow me down and let him pounce on my. Playing with my bat (when I had the table bat) meant he was speeding the game up, thereby, playing into my hands much more.

The whole experience made me value my own bat much more. It also showed me how used to my bat I have got as well as how difficult it might be if I swapped. I also realise that in the future, when I want to do more stuff with the ball, I will have to change my bat. However, this may mean I go a month or two where I will struggle to adjust.