Lessons and the Culture of Table Tennis 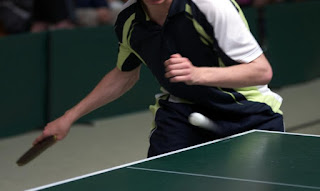 Since my last post the 'epic journey' has evolved considerably. My injury and the recovery has been the catalyst for table tennis to go from 'my weird hobby' to 'part of my life'. The change has meant that pressure has fallen upon me in a way I hadn't previously considered. I have always thought of 100m sprinting as the ultimate pressure in my life. The racing heartbeat beforehand, the nervous energy and the constant need to wee are the symptoms of the biggest adrenaline in my life. However, my knowledge that I need to learn a sport I have zero knowledge of both quickly and accurately has led to pressure of a different kind. I have thrown my eggs into the basket of table tennis and it has gone from being a joke to being part of who I am. The practices for me are currently averaging 4 sessions per week of about 2 hours per session. This gives a rough amount of 8 hours of pure table tennis per week as well as a variety of ancillary work i.e. fitness & strength etc. alongside this (some correlating more than others). I would expect to be joining the Maidstone league soon so that will increase my time on the table, likewise, I will also be investing in a new table after I have paid off a few recent, surprise, bills!

This segues nicely into my experience of playing at all of these clubs. I think, in any new club I have joined, I have always been met with trepidation by the new members. I feel that it is probably due to the way I look and the way I act which can lead to me being perceived as somewhat arrogant as well as people assuming I will be a 'rival' to them at the particular sport. I recently had someone ask me if I play table tennis for England before I had even picked up a bat. It creates friction that is completely understandable and, eventually, that goes away and I become part of the furniture! At my first 3 clubs, all of which I would consider 'home' clubs for me, this has been perfect. I have made friends with everyone and, although some people in the table tennis world are a little quirky they have all added something to my experience in the sport. Each club I have a different age group around me from 11 year old's to 80 year old's there is a home for everyone. However, aside from one club, there is a distinct lack of people who are my age. From about 18-30 there is a real emptiness. Although clubs have a lack of people, it was most concerning at the recent coaching session I went to.

I saw it on the wall of a club I went to (more on that club later). It seemed to be well recommended with some high quality coaches and players of the sport including 3 GB internationals, two of which were Olympians. On short notice I booked in for a day (it was a two day event but I was unsure how much a beginner such as my self would get out of it). It was a 30 min drive up there and it started, initially as I had expected. We were first ranked by the method of 'top table'. This is a number of quick games where players move up or down the rows of table tennis tables depending on whether they win or lose. Which seemed to me to be favouring people who started on the higher tables. I had been playing quite poorly in the week leading up to it (I had the flu and I was struggling to adjust to my new schedule), I also suffered from terrible nerves throughout the whole day. Therefore I was placed in the bottom group when the tables settled. In reality this is where I wanted and needed to settle as I need the basics taught to me. The first 4 hours of play (it was a 7 hour event) it was all forehand work. I got taken to the table and got made to "stroke" forehands with topspin onto the table. No doubt, did this make me better. It was a great session of coaching from clearly a considerate and thoughtful coach. We went back on the tables and hit balls are each other whereby I practised as much as I could with the others.

Our group, itself, contained 3 children and then 5 much older people and, of course, me. The other two groups for the 'higher' level players were mostly people of 35 onwards (and that is being generous). Quite literally nobody was 10 years either side of me. It was actually pretty crazy. It also displays a damning problem with retention within a sport that has very high barriers to entry. After lunch these two groups were further divided into two groups. Group one: the young children. Group Two: the older people (nobody under 50) and, of course, me. The other coach who was with us decided to ask us what we wanted to do. Usually, he explained, if we were younger we would be doing forehand practice as the basis of everything. However, because "none of us were ever going to represent GB we could practice something else". He further qualified this by saying that every child he works with he trains the same way as "any of them could be a future Olympian". Personally, I think that is disgusting coaching. Excluding me, any of those older people could have been potential veteran internationals, they could of helped their grandchild become a future international or the could of just improved the basics which are the foundation of every sport. Going back to me. I am 26. I am fit, strong, quick and have been playing 3 months. I understand I may not be a future Olympian (though don't discount me just yet), but I might be incredible in the years to come and clearly could be nationally ranked. Everyone who approaches the sport should be coached the same way, regardless of age, unless they ask not to be. It creates both continuity and brings up the whole standard of the sport for the future. It also creates the ability to share ideas, technical pointers and helps adults who are passing on experience to do it right. It saddened me greatly to be treated this way. Especially at the age and level I am at.

The village elders decided they wanted to try backhands and chops. However, although they wanted to practice these parts of their game, they didn't want to do the drills. Therefore, I was left to practice my backhand (I was trying to 'brush' the ball to create topspin) and my chop (I was trying to learn the delicacy and foot positioning on the shot) against people that just wanted to play table tennis in competition. Something, for once, that I wasn't attending for.

The last part of of the day, once again, became an enjoyable learning session. It was mostly about the serve. How to strike the ball at different points on the pendulum. How to serve short and how to put backspin onto the serve and, of course, that disguising the serve is vital at the highest levels. In many ways this salvaged the event. However, the experience made me question myself greatly. I learnt a lot and have some very positive experiences to take away but the lessons have been clouded by a few moments that were frankly off putting. It helped develop an image of the state of coaching within table tennis. It showed how communication as well as technical coaching creates a rewarding experience for the athlete and that continuity is important. Singling out the older, the younger, the less good and the better ones shouldn't happen unless it is to create development streams.

So taking my experience in this single setting into account, lets have a look at the state of table tennis in my area. I am almost 4 months of play into my table tennis adventure and, aside from three lads that joined my first club around the same time I did, I have seen very few new members. I also find there are a lot of people who just drop out of the sport. There are a few people in their middle age years that seem to come back to the sport but it is a worrying sign. The first problem is the lack of advertised 'social' play. By this I mean non-league table tennis. Everything is league-centric. The league itself is split into clubs which is further split into teams. (this seems to be the same process in all table tennis associations around the country) It means that an individual is going to find it hard to even play table tennis let alone progress. As I have found out today, the league doesn't even go year around and there is a restricted entry if you have not played in the first half of the league. It smacks of an elitism that isn't right within a minority sport and it is no surprise that the vast majority of league players are from the older age groups who have been around these leagues for a long time.

The lack of training often means that people have played the majority of table tennis at home or at youth clubs etc. Consequently, it creates bad habits that may even hinder initial development of athletes with the highest level of potential within the sport. At my age and ability level, it is no surprise that coaching isn't exactly forthcoming. However, the real truth is that I have received more coaching than most. Coaching is missing from most of the clubs and the coaching that does exist is from unqualified coaches. These coaches, I must say, are brilliant and give up their time and energy to put in work with people like me. Likewise, more experienced table tennis players are, themselves, always ready to lend advice. It is just that coaching from unqualified sources creates multiple narratives. Everybody wants to give different advice and to younger athletes this could be quite confusing.

The ironic thing is that there are a ton of willing and able older athletes and coaches available. However, there are a lack of senior coaches and a singular coaching philosophy that would create a better standard of player in the area around me. The sport seems behind others in creating a "trickle down" effect with sports science and marketing. It probably needs restructuring in the lower levels of the sport. More coaches and better accessibility for novice participants will make the sport, which is seeing a resurgence in the casual and outdoors leisure sectors, thrive.