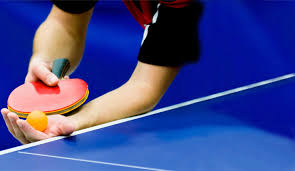 In my first few weeks of practice one thing became clear. One day a week is nowhere near enough. Now, don't get me wrong, these people are probably the perfect people to practice against. They are a range of abilities, styles and they all want to help coach. However, that simply wouldn't do in the long term.

My house, unlike some, is not enormous and is co-habited by my tolerant but not completely approving girlfriend. Therefore, negotiations were swift but difficult and eventually I was "persuaded" that a smaller table, in the words of my loving girlfriend 'might be for the best'. So after paying for my little table and waiting for my, surprisingly quick, postage. It arrived. Since then the familiar "ping pong" sound has rung out across the lounge and balls have flown under and over every single piece of furniture in the house. Hours later and I have learnt one thing, consistency. A small table reduces the speed you can play at but it increases the accuracy you will need. It has also enabled me to play serves and try and get that spin that you see the top players do. Needless to say, I am not quite there yet.

The biggest fear I have is not taking risks at the table. When I play people I know, I am very competitive. It leads to a far more defensive game and fear of failure that I don't get when I am playing people who I have never met. What happens then is that I start to win more but my thoughtfulness and adventure around the table reduce considerably.

It does highlight something that has eluded me for much of my life. The ability to lose. I hate losing. More specifically, I am the worst loser anyone has ever met. It is actually pretty disgraceful sometimes. I love a tantrum and I cannot help it. In all honesty I am a massive knob when it comes to losing. Yet, the consequence of starting a sport at 25 that you have never played before means that you lose a lot. Especially if you want to improve. Improving means playing and observing people much better than you. Picking up tips and trying out those things yourself. Trying means failing, a lot. Table Tennis has taught me (except when playing Ollie) that losing is to be embraced. Then used as a reminder that I don't want to feel like that again. However, until I am at the top of the tree I am always going to have to lose to someone and that is the way it will work for the time being. This mental adjustment is probably good for me. In fact it is probably good for everybody around me. Society may well be a better place due to my new found ability to absorb, some, loses. Although, lets not be fooled into thinking that I won't try and win with every fibre of my body!

Winning is especially pertinent when it is your girlfriend on the other side of the table or as I now affectionately know her: The Human Backboard. Having the table in my house is pretty fun. Its like having a board game that you never get the first part of i.e. bored. Like my friends, Stace has taken up supporting me on this dream by playing with me. The problem is she has suddenly become pretty good. She returns shots that literally nobody who I have played with has so far. She has this innate ability to take pace off the ball and return whatever you can throw at her. It actually makes her the perfect person to practice with. I have to be strategic and try new things; I have to create more and more intricate shots score a winner. Likewise, I am also punished for mistakes I make as she can return most of my shots. The shots I don't get are almost always game breakers. Luckily her enthusiasm hasn't stretched to coming to the club, which means I can keep my dignity for a little longer.

The other major new feature of my #TTLYF (seriously I hope I have just created that). Is having my own bat. Its much faster than the previous bats I was using. It also has rubber fully covering the blade (the wooden bit). Unlike the ones at the club which covered half a blade at best. I really do notice the difference and I feel a lot more professional. It is only a beginner bat but it does feel like I can put more speed and spin on the ball already. I bought a couple of cheap bats for the house and this one really does create a noticeable difference relative to those bats which seem designed to take speed off the ball rather than help the player put it on.

My first week back at the club after getting a table was a show of more improvement. My serves still suck, I mean really suck, but getting the ball over the net on the serve is much more consistent. This means that I am losing less points than ever. I am also hitting the ball and keeping it on the table harder and more often. It means that I can now at least hold a rally with the better players. One of the first guys who played with me at Larkfield TTC was the first guy I played and we warmed up relatively well before I played a few games with him. Don't get me wrong, he was not playing at full capacity but I did get much closer to him. I even took him to a points score of 11-13 on the second game. Following that, my games were not ideal. The shots were just not coming off by small margins. I lost to the guy who provided my first ever win convincingly and another guy who I had never played before. Both are decent players but felt eminently beatable if I was a little more precise. Yet, my final match proved the most rewarding. I was saddened so far that my play over the evening had yielded no wins for me. My last match was going that way initially. I was comfortably beaten in the first game. Once again, with shots missing by the smallest of margins and silly mistakes I need to cut out to really get to the higher levels. Then, finally, shots started hitting the table and I got the measure of the other guy and I started to win. Confidence returned and I finally won my first best of three. 2 games in a row won. Whoop!

Next week is my operation on my knee so I will be out of action for a little bit but hopefully I will find a way around it so I don't miss too much table tennis. I think my ever loving girlfriend may drive me up to the club to use the machine that fires balls at you if I have crutches.

I am also going to try and do some more club nights. I have emailed a club in Coxheath and in Barming to see if I can come along. New players and more time on the table will hopefully further my rate of improvement and mean that I can potentially, maybe, possibly win three games in a row.